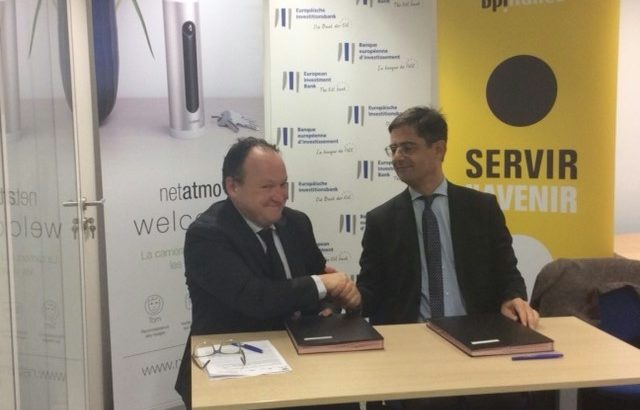 Bpifrance and the European Investment Bank (EIB) Group are strengthening their commitment to the Investment Plan for Europe with two new agreements: support for technological industrialisation via the creation of the first European investment platform and financing of innovative SMEs and midcaps with the renewal of the InnovFin SMEG agreement. The signing ceremony took place at the premises of Netatmo, a company specialising in connected devices and a beneficiary of the first InnovFin agreement.

Two financial agreements worth more than EUR 1bn were signed by EIB Vice-President Ambroise Fayolle and Nicolas Dufourcq, CEO of Bpifrance, with a view to boosting equity investments in the industry of the future and increasing the volume of loans to innovative French small and medium-sized enterprises (SMEs) and midcaps. These two operations have been made possible by a guarantee from the EU budget put in place as part of the European Fund for Strategic Investments (EFSI), a component of the Investment Plan for Europe (also known as the Juncker Plan).

Carlos Moedas, European Commissioner for Research, Science and Innovation, welcomed these new agreements: “With European investment totalling more than EUR 1bn in innovative French businesses, the European Union is accelerating the economic recovery in France and Europe. It is also a strong signal to the private sector that will inspire companies to take a chance and innovate for the common good of our societies.”

“Today is an important day for our partnership with Bpifrance,” remarked Vice-President Ambroise Fayolle at the signing ceremony. “This new agreement with the EIF will enable us to double our lending capacity to innovative companies. With the Juncker investment platform – the first platform of its kind in Europe – the Juncker plan is adding to the EUR 700m dedicated to industrial recovery by the French Government. This initiative should catalyse almost EUR 2bn of investment in industrial assets and the creation of at least 4 000 jobs. These two new financing programmes mark the Juncker Plan’s ongoing progress in France, with a current total of 37 approved operations from the EIB Group totalling EUR 2.8bn in investments.”

“Innovation and Seed Capital loans have been available to French companies since May 2015. The quick implementation of the Juncker Plan has confirmed the key role of Bpifrance in promoting innovation and its position as a trusted partner of the EU institutions. This second envelope further strengthens its role as an industrial bank by increasing the lending capacity of the “industrial special-purpose vehicle” (industrial SPV) fund by EUR 100m, in order to support innovative companies needing to accelerate the industrialisation of new industrial activities,” said Nicolas Dufourcq, CEO of Bpifrance.“The agreement signed today enables the industrial SPV fund to offer European industrial companies the opportunity to co-invest in the industry of the future in France and create new industrial jobs.”

These two agreements strengthen Bpifrance and the EIB Group’s action in these two key segments of the innovation economy which entail higher risk exposure.

As part of the Investments for the Future Programme, in early 2015 the Government and Bpifrance created the industrial SPV (special-purpose vehicle) fund to invest in technology industrialisation projects that are growth and job creation drivers.

With EUR 700m at its disposal to create the sustainable industry of the future, the fund has already invested EUR 160m in five projects in sectors as diverse as renewable energies, biotechnology and green chemicals.

This initiative attracted the attention of the European Fund for Strategic Investments, which aims to correct market failures by supporting strategic investments, particularly in innovation.

The EIB industrial SPV fund – with capital of EUR 100m – was created to bolster the activities of the industrial SPV fund by expanding its reach and raising its status. To this end, it is the very first “investment platform” (a structured investment agreement enabling investor resources to be pooled and several projects to be financed) supported by the EFSI.

The two Bpifrance-managed funds are designed to work hand-in-hand, making joint investments in industrialisation projects. Together, they will be able to make around 20 investments.

In view of the success of the initial programme signed in May 2015, Bpifrance and the European Investment Fund (EIF) are renewing the InnovFin SMEG agreement, doubling the size of the innovative company financing envelope to a total of EUR 420m over two years. Two tools are covered:

Since they offer the most favourable financing terms, the IL and SCL programmes have made it possible to support almost 850 companies in 17 months, demonstrating the strategic success of these tools.

The signing ceremony ended with a tour of Netatmo, a company specialising in connected devices and well-being, founded in 2011 by Fred Potter and Jean-Pierre Dumolard and the beneficiary of an Innovation Loan to finance the commercial acceleration of their latest innovation: Welcome, an indoor security camera with face recognition.

Created by the Treaty of Rome in 1958, the EIB is the European Union’s bank, which, together with its dedicated SME support subsidiary the European Investment Fund (EIF), forms the EIB Group.

On the strength of its expertise and the financial attraction of its AAA rating, the EIB Group has established itself as a key player in the recovery through investment in Europe – and especially in France where it provided nearly EUR 8.7bn of new loans in 2015, with 46% of its activities dedicated to climate action. The EIB Group’s exceptional effort in 2015 to support the real economy in France was conducted in concert with its public and private-sector partners.

Since 2015, the EIB Group has been the operator of the Investment Plan for Europe. The projects financed by the European Fund for Strategic Investments (EFSI) have a higher risk profile, since the aim is to support investment in certain sectors of activity of vital importance for the future of the European economy, such as innovation and the industry of the future. The Investment Plan for Europe is gaining momentum in France: 37 projects totalling EUR 2.8bn have already been approved, and should mobilise investments of more than EUR 15bn.

Further details are available at: www.eib.org

Bpifrance is a subsidiary of Caisse des Dépôts and the French Government, supporting companies with credit, guarantees and equity from the seed capital stage to their IPO. Bpifrance also provides support services and expanded assistance for innovation, mergers and acquisitions and exports via its partnership with Business France and Coface. Bpifrance offers companies a wide range of financing options at every key stage of their development, with products tailored to specific regional circumstances. Its 47 regional branches (90% of decisions are made at regional level) give Bpifrance the strength to drive the economic competitiveness of businesses. Bpifrance acts to support Government and regional policy to meet three objectives:

With Bpifrance, companies benefit from a powerful, efficient local player to meet all their financing, innovation and investment needs.

Under Horizon 2020, the EU research programme for 2014-20, the European Commission and the European Investment Bank Group (EIB and EIF) launched a new generation of financial instruments and advisory services in 2014 to help innovative firms access finance more easily. Until 2020, “InnovFin – EU Finance for Innovators” is offering a range of customised products which will make available more than EUR 24bn of financing support for research and innovation (R&I) by small, medium-sized and large companies and promoters of research infrastructure. Overall, this finance is expected to mobilise up to EUR 48bn of investment in research and innovation.

Backed by funds set aside under Horizon 2020 and by the EIB Group, InnovFin financial products are used to support R&I activities, which by their nature are riskier and harder to assess than traditional investments, and therefore often face difficulties in accessing finance. All are demand-driven instruments, with no prior allocations between sectors, countries or regions. Firms and other entities located in EU Member States and Horizon 2020 Associated Countries will be eligible as final beneficiaries.

Further details are available at: www.bpifrance.fr